This photo was taken with a flash in a dark stairwell. Note the shadow on the left, climbing the stairs and the wall.

This photo was taken right after the previous photo. Note the shadow on the left is gone, but now there is a shadow on the right hand side.

We had a great time with the tours this weekend. We had a tour on both Friday and Saturday and were actually permitted into the back wing of the old school. (This is kept off limits to tours and visitors for safety reasons as there are holes in both the roof and the floor.)

When the first two photos were taken neither Stephen, the photographer, nor anyone standing with him noticed anything odd. The shadows were only spotted afterwards, while going through the evidence.

On the second night, Stephen went back to the same area to purposely try to debunk the shadows, trying to use different angles to recreate them. He even had people standing on either side of him to help the shadows along, but no shadows appeared.

Look at the photos on the left and let us know what you think. 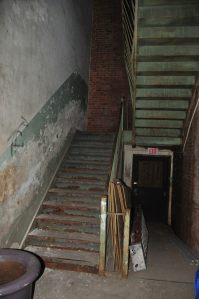 This photo was taken under the same conditions as the other two. Note the lack of shadows.

4 thoughts on “Some Early Evidence!”